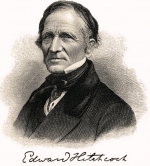 Author Robert T. McMaster will discuss his latest book, All The Light Here Comes From Above: The Life and Legacy of Edward Hitchcock, in this Zoom webinar.

About The Book: Edward Hitchcock (1793-1864) was a geological pioneer. A native of Deerfield, Massachusetts, he was the first State Geologist of Massachusetts, the first American geologist to publicly embrace the theory of continental glaciation, and the first scientist to unearth evidence of dinosaurs in North America. McMaster's book, All the Light Here Comes from Above: The Life and Legacy of Edward Hitchcock, is the first biography ever written of Hitchcock, who was one of 19th-century America's most influential scientists.

About The Author: Robert T. McMaster's interest in Edward Hitchcock began when he visited the Pratt Museum of Natural History at Amherst College over half a century ago. After completing his undergraduate studies at Clark University, he attended graduate school at Andover Newton Theological School and Boston College, earning a master's degree in geology and education at B.C. Robert taught middle school science and worked as an administrator for several environmental education organizations over the next fifteen years. Returning to graduate school in 1990, he earned an M.A. in biological sciences at Smith College and a Ph.D. in plant biology at the University of Massachusetts. Robert taught biology at Holyoke Community College in Holyoke, Massachusetts, from 1994 to 2014. He has authored many articles on botany, conservation biology, and the history of science, and has written three historical novels set in New England in the World War I era. Learn more about Robert HERE.

Register directly on Zoom HERE. Sponsored by the Corning Foundation and the Friends of the Library.