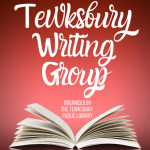 Are you a writer -- or an aspiring writer -- looking for some support? The new Tewksbury Writing Group, which meets the third Tuesday evening of every month, is open to everyone who's interested in writing -- all genres, all skill levels. Each meeting -- which will take place via Zoom -- consists of some conversation, followed by a guest speaker (typically a published author) offering some tips of the trade, followed by a period of reading & friendly critiquing via breakout sessions. (In the breakout sessions, authors of like genres will be grouped together.)

This month's guest speaker is Jeff Deck. Jeff is a fiction ghostwriter and editor whose writing has been featured on the Today Show. He lives in Maine with his wife, Jane, and their silly dog, Burleigh. Deck writes science fiction, fantasy, horror, dark fantasy, and other speculative fiction, as well as helping other authors tell their stories. Deck is the author of the new urban fantasy / mystery series The Shadow Over Portsmouth (Book 1: City of Ports, Book 2: City of Games, Book 3: City of Notions). Deck wrote the supernatural thriller The Pseudo-Chronicles of Mark Huntley and the sci-fi gaming adventure novel Player Choice. Deck is also the author, with Benjamin D. Herson, of the nonfiction book The Great Typo Hunt: Two Friends Changing the World, One Correction at a Time. His stories appear in various anthologies including Robots and Artificial Intelligence, Corporate Cthulhu, and Murder Ink 2: Sixteen More Tales of New England Newsroom Crime. Learn more about Jeff HERE.

The group is facilitated by author Dale T. Phillips, who has published novels, story collections, non-fiction, and over 70 short stories. Stephen King was Dale's college writing teacher, and since then, Dale has found time to appear on stage, television, radio, in an independent feature film, and compete on Jeopardy (losing in a spectacular fashion). He's a member of the Mystery Writers of America and the Sisters in Crime.