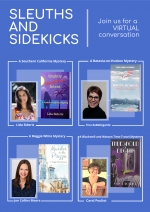 A great mystery series is about more than a puzzling crime. It’s the sleuths and their sidekicks who make us fall in love with a book. Join Tina deBellegarde, Jen Collins Moore, Carol Pouliot, and Lida Sideris for an interactive conversation about their detectives and their sidekicks.

Tina deBellegarde’s debut novel, Winter Witness, was nominated for an Agatha Award, a Silver Falchion Award and a Chanticleer Mystery & Mayhem Award. Tina also writes short stories and flash fiction. Her story “Tokyo Stranger” appears alongside celebrated authors in the Mystery Writers of America anthology When a Stranger Comes to Town edited by Michael Koryta. Tina’s short fiction also appears in the last two editions of The Best New England Crime Stories. She is the secretary of her local chapter of Sisters in Crime. She is also a member of Mystery Writers of America, and Writers in Kyoto. Tina lives in Catskill, New York with her husband Denis where they harvest shiitake mushrooms and tend to their beehives. She travels to Kyoto, Japan regularly to visit her son Alessandro.

Jen Collins Moore transports readers to Rome in her new series, the Maggie White Mysteries. The perfect blend of funny and smart, her debut novel, Murder in the Piazza, is filled with the art, history and food of Europe’s greatest city. Jen is the founder of Meez Meals, Chicagoland’s most popular meal kit service. She grew up in New England and now lives in Chicago.

A Francophile at age 11, Carol Pouliot dreamed of getting her passport and going to Paris. After a Master’s degree in French at Stony Brook University, she headed to Marseille, France for her first teaching job. She taught French and Spanish for over 30 years in Upstate New York, and also founded an agency that provided translations in over 24 languages. Carol is the author of The Blackwell and Watson Time-Travel Mysteries, which include Doorway to Murder (#1), Threshold of Deceit (# 2), Death Rang the Bell (#3), and the upcoming RSVP to Murder (#4). When not writing, Carol can be found reaching for her passport and packing a suitcase for her next adventure.

Lida Sideris' first stint after law school was a newbie lawyer's dream: working as an entertainment attorney for a movie studio...kind of like her heroine, Corrie Locke, except without the homicides. Lida was one of two national winners of the Helen McCloy Mystery Writers of America Scholarship Award for her first book and a Silver Falchion Award Finalist for her newest book. She lives in the northern tip of Southern California with her family, rescue dogs and a flock of uppity chickens.

Register HERE. Sponsored by the Friends of the Tewksbury Library.