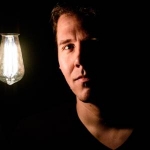 Gather ‘round the virtual campfire with Jeff Belanger, one of New England’s premiere storytellers! For over 20 years, Jeff has been exploring the unexplained. He seeks out history, folklore, ghosts, monsters, and legends all over the world and in your backyard. His "New England Legends" presentation offers a tour of haunts, monsters, aliens, and weird history from our region. The bizarre is closer than you think!

About Jeff: Jeff Belanger is one of the most visible and prolific researchers of folklore and legends today. Jeff is the award-winning, Emmy-nominated host, writer, and producer of the New England Legends series on PBS and Amazon Prime, and is the author of over a dozen books (published in six languages). He also hosts the New England Legends weekly podcast, which has garnered over 2 million downloads since it was launched. Learn more about Jeff HERE.

✘ There are no longer enough available spaces for further registration for this event.