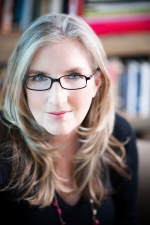 How To Register: Register directly on Zoom HERE.

How To Buy A Copy Of The Book: Autographed copies of The Shadow Box will be available for sale before and during the event from our bookstore partner -- Wellesley Books. Click HERE to order. 10% of the proceeds from your sale will be donated to the host library of your choice.

About The Author: Luanne Rice is the New York Times bestselling author of thirty-five novels that have been translated into twenty-four languages. Several of Rice’s novels have been adapted for television, including Crazy in Love, for TNT; Blue Moon, for CBS; Follow the Stars Home and Silver Bells, for the Hallmark Hall of Fame; and Beach Girls, for Lifetime. Rice is a creative affiliate of the Safina Center, an organization that brings together scientists, artists, and writers to inspire a deeper connection with nature―especially the sea. Rice is an avid environmentalist and advocate for families affected by domestic violence. She lives on the Connecticut Shoreline. Learn more about Rice HERE.

About The Book: Enjoy a haunting thriller about how far one wife is willing to go to expose the truth―and the lengths someone will go to stop her. After artist Claire Beaudry Chase is attacked and left for dead in her home on the Connecticut coast, she doesn’t know who she can trust. But her well-connected husband, Griffin―who is running for governor―is her prime suspect. Just before the attack, Claire was preparing for an exhibit of her shadow boxes, one of which clearly accuses Griffin of a violent crime committed twenty-five years ago. If the public were to find out who her husband is, his political career would be over. Claire’s certain her husband and his powerful supporters would kill her to stop the truth from getting out. When one of Claire’s acquaintances is murdered, the authorities suspect the homicide is linked to the attack on Claire. As the dual investigations unfold, Claire must decide how much she’s willing to lose to take down her husband and the corrupt group of elites who will do anything to protect Griffin’s interests and their own.

About The Moderator: Originally from Sacramento, Elle Marr graduated from UC San Diego before moving to France, where she earned a master’s degree from the Sorbonne University in Paris. She now lives and writes in Oregon, with her husband, son, and one very demanding feline. Her debut thriller, The Missing Sister, was a #1 Amazon Best Seller, #1 in the Kindle Store, an Amazon Charts Best Seller, featured in Woman's World, and named one of PopSugar's 31 Thrillers of 2020. Words she's written can also be found on CrimeReads and Criminal Element. For more information and updates on her next thriller, connect with her online at www.ellemarr.com, on facebook, Twitter, or Instagram. Her upcoming thriller, Lies We Bury, will be available on April 1.