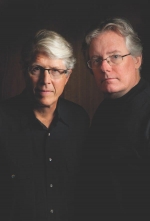 REGISTRATION IS FULL AS OF 5:45PM ON JANUARY 29. Please note this event will also be streamed live on the Tewksbury Library's Facebook page.

How To Register: Registration is closed as of 5:45pm on January 29. Watch the event on the library's Facebook page at www.facebook.com/tewksburylib.

How To Buy A Copy Of The Book: Autographed copies of The Scorpion's Tail will be available for sale before and during the event from our bookstore partner -- Wellesley Books. Click HERE to order. 10% of the proceeds from your sale will be donated to the host library of your choice.

About The Authors: The thrillers of Douglas Preston and Lincoln Child "stand head and shoulders above their rivals" (Publishers Weekly). Preston and Child's Relic and The Cabinet of Curiosities were chosen by readers in a National Public Radio poll as being among the one hundred greatest thrillers ever written, and Relic was made into a number-one box office hit movie. They are coauthors of the famed Pendergast series and their recent novels include Crooked River, Old Bones, Verses for the Dead, and City of Endless Night. In addition to his novels, Douglas Preston writes about archaeology for The New Yorker and National Geographic magazines. Lincoln Child is a Florida resident and former book editor who has published seven novels of his own, including bestsellers such as Full Wolf Moon and Deep Storm. Learn more about Douglas and Lincoln HERE.

About The Book: From #1 bestselling authors Preston & Child comes a thrilling novel following archaeologist Nora Kelly and FBI Agent Corrie Swanson as they work together to solve a twisted crime that reaches far beyond any of their worst fears. A mummified corpse, over half a century old, is found in the cellar of an abandoned building in a remote New Mexico ghost town. Corrie is assigned what seems to her a throwaway case: to ID the body and determine cause of death. She brings archaeologist Nora Kelly to excavate the body and lend her expertise to the investigation, and together they uncover something unexpected and shocking: the deceased apparently died in agony, in a fetal position, skin coming off in sheets, with a rictus of horror frozen on his face. Hidden on the corpse lies a 16th century Spanish gold cross of immense value. When they at last identify the body -- and the bizarre cause of death -- Corrie and Nora open a door into a terrifying, secret world of ancient treasure and modern obsession: a world centered on arguably the most defining, frightening, and transformative moment in American history.

About The Moderator: Hank Phillippi Ryan is a USA Today bestselling author of 12 thrillers, winning the most prestigious awards in the genre: five Agathas, three Anthonys, the Daphne, and for The Other Woman, the coveted Mary Higgins Clark Award. She is also on-air investigative reporter for Boston’s WHDH-TV, with 37 EMMYs and dozens more journalism honors. Book critics call her “a master of suspense,” “a superb and gifted storyteller.” Hank's newest standalone psychological suspense thriller is The First To Lie. Publisher Weekly starred review says: "Stellar. Ryan could win a sixth Agatha win this one." Learn more about Hank HERE.

About The Series: A collection of North of Boston libraries have joined forces to host a series of virtual discussions with bestselling authors this fall and winter. This event is co-sponsored by libraries in Andover, Billerica, Chelmsford, North Reading, Tewksbury, Wilmington and Woburn.