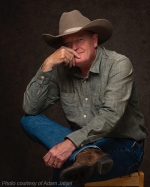 Bestselling author Craig Johnson will discuss his brand new book -- Next To Last Stand: A Longmire Mystery -- in conversation with moderator Hank Phillippi Ryan in this Zoom webinar.

How To Register: Register directly on Zoom HERE. Space is limited.

About The Author: Craig Johnson is the New York Times bestselling author of the Longmire mysteries, the basis for the hit Netflix original series "Longmire." He is the recipient of the Western Writers of America Spur Award for fiction, and his novella Spirit of Steamboat was the first One Book Wyoming selection. He lives in Ucross, Wyoming, population twenty-five. Learn more about Craig HERE.

About The Book: The new novel in the beloved New York Times bestselling Longmire series. One of the most viewed paintings in American history, Custer's Last Fight, copied and distributed by Anheuser-Busch at a rate of over two million copies a year, was destroyed in a fire at the 7th Cavalry Headquarters in Fort Bliss, Texas, in 1946. Or was it? When Charley Lee Stillwater dies of an apparent heart attack at the Wyoming Home for Soldiers & Sailors, Walt Longmire is called in to try and make sense of a piece of a painting and a Florsheim shoebox containing a million dollars, sending the good sheriff on the trail of a dangerous art heist.

About The Moderator: Hank Phillippi Ryan is a USA Today bestselling author of 12 thrillers, winning the most prestigious awards in the genre: five Agathas, three Anthonys, the Daphne, and for The Other Woman, the coveted Mary Higgins Clark Award. She is also on-air investigative reporter for Boston’s WHDH-TV, with 37 EMMYs and dozens more journalism honors. Book critics call her “a master of suspense,” “a superb and gifted storyteller.” Hank's newest standalone psychological suspense thriller is The First To Lie. Publisher Weekly starred review says: "Stellar. Ryan could win a sixth Agatha win this one." Learn more about Hank HERE.

About The Series: A collection of North of Boston libraries have joined forces to host a series of virtual discussions with bestselling authors this fall. Their next virtual event will take place on Wednesday, October 14 at 7pm with Gregory Maguire, who will be discussing the 25th Anniversary of Wicked: The Life and Times of the Wicked Witch of the West, and his latest book, A Wild Winter Swan.