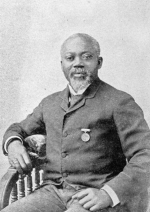 Bruce Chester -- an actor, comedian and veteran -- will perform as Sergeant William Harvey Carney. Sgt. Carney carried the flag for the Mass. 54th infantry during the Union attack on Fort Wagner in Charleston, South Carolina (also told in the 1989 film: Glory). Sgt. Carney was injured, received the Medal of Honor and became a letter carrier in New Bedford, MA.

This living history performance will take place on the library's back lawn. Attendees are encouraged to bring their own blankets or chairs. In case of inclement weather, the performance will be rescheduled for later in August. Sponsored by the Friends of the Library.