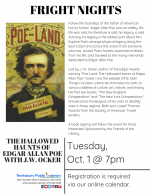 Follow the footsteps of the father of American horror fiction! Edgar Allan Poe was an oddity. His life was odd, his literature is odd, his legacy is odd. Actually, his legacy is the oddest part about him. Explore Poe's strange physical legacy along the East Coast and across the ocean from someone who has toured Poe's homes, examined artifacts from his life, and traveled to the many memorials dedicated to Edgar Allan Poe.  Led by J. W. Ocker, author of the Edgar Award-winning "Poe-Land: The Hallowed Haunts of Edgar Allan Poe." Ocker runs the website OTIS: Odd Things I've Seen, where he chronicles his visits to various oddities of culture, art, nature, and history. His first two books, "The New England Grimpendium" and "The New York Grimpendium," are personal travelogues of his visits to deathly sites in those regions. Both won Lowell Thomas Awards from the Society of American Travel Writers. A book signing will follow the event for those interested. Sponsored by the Friends of the Library.