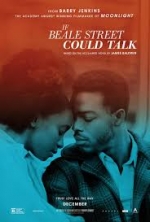 Enjoy a screening of one of Hollywood's newest DVD releases -- If Beale Street Could Talk, a drama starring KiKi Layne, Stephan James, and Regina King. The film received 3 Academy Award nominations, including Best Supporting Actress. A woman in Harlem embraces her pregnancy while she and her family struggle to prove her fiancé innocent of a crime. Rated R. 119 minutes. Doors will open at 12pm. Candy & water will be served. A $1 donation is suggested. Co-sponsored by the Friends of the Tewksbury Public Library and Tewksbury Lions Club.