A Journey Through Rock In 50 Concerts with WZLX's Carter Alan 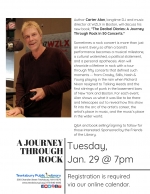 Author Carter Alan, longtime DJ and music director at WZLX in Boston, will discuss his new book, "The Decibel Diaries: A Journey Through Rock In 50 Concerts." Sometimes a rock concert is more than just an event. Every so often a band’s performance becomes a musical milestone, a cultural watershed, a political statement, and a personal apotheosis. On any given night, a rock concert can tell the truth about who we are, where we are, and what’s going on in music and life right now. Alan will chronicle a lifetime in rock with a tour through fifty concerts that defined such moments -- from Crosby, Stills, Nash & Young playing in the rain when Richard Nixon resigned to Talking Heads and the first stirrings of punk in the basement bars of New York and Boston. For each event, Alan shows us what it was like to be there and telescopes out to reveal how this show fit into the arc of the artist’s career, the artist’s place in music, and the music’s place in the wider world.  Learn more about Alan HERE. Q&A and book selling/signing to follow for those interested. Sponsored by the Friends of the Library.

NOTE: Alan was originally scheduled to speak here this past August, but his talk was postponed.